When we think of bandoliers, we typically don’t think of holsters to begin with.  Instead, the images of wild west outlaws or military machine gunners with crisscrossing belts of cartridges come to mind instead.  Therefore, many discard bandolier holsters as ridiculous to begin with.

Nonetheless, bandolier holsters are not the best option for every scenario where you would need to carry a handgun.  But then again, is there any holster that fits each and every scenario? In truth, you’ll need a variety of different holsters for different uses, and you’ll also need a variety for different guns.  If you plan on packing a 9mm pistol, a hip holster or a shoulder holster would be a better choice.  But if you plan on packing a scoped long barreled .357 or .44 magnum revolver, then you’ll want to give shoulder holsters or bandolier holsters a look.

There aren’t loads and loads of bandolier holster models like there are for other more common types of holsters. Since they are considered more of a specialty item, they aren’t continually mass produced with new lines coming out regularly from the top holster companies. But rest assured there are some diamonds out there and I’ll point out the top 3 below:

The Bulldog Black Scope Bandolier holster is a very affordable and simple bandolier holster that will be able to fit nearly any large frame and large caliber scoped revolver with a scope and a barrel length of up to eight inches.  If you plan on trying your hand at handgun hunting next time hunting season comes around, this is an excellent holster choice for you.

This bandolier holster comes with an adjustable shoulder strap, meaning that it can be adjusted for comfort and allows you to set it at the right drop length. And as we have mentioned, there is enough space in this holster for you to have a scope on your revolver. Common revolvers used with this holster, but not limited to, are: Ruger Redhawk, Smith and Wesson Redhawk, Taurus Raging Bull, Llama Super Comanche, Colt Python/Trooper/Anaconda and many others.

There are many simple and low cost bandolier holsters for revolvers out there, but many of them are designed to accommodate revolvers with scopes.  If you plan on simply packing a revolver as a sidearm next time you go hunting, then this Bandolier Shoulder Holster Unscoped is one to give consideration to.

This holster comes with a number of important features, including a belt to secure the holster tightly and a thumb break strap that both keeps the revolver secure in the holster and allows for a fast draw if necessary.  In addition, this holster also has a shoulder strap that is adjustable, so you can set it to your specifications.

Many people searching for a high end bandolier holster for their scoped revolver may think that leather is their only option, but this Blackhawk Scoped Pistol Bandolier holster proves them wrong.  This bandolier holster is designed to accommodate any double or single action revolver with a barrel length up to 6 ½ inches, and made perfect for firearm owners who are packing bigger scoped hunting or target guns across their body.

What makes this holster unique is the padded flap that is made to protect the entire gun from all kinds of weather.  But in the event that you don’t want the padded flap covering the gun, you can also remove it and install a retention flap instead for a quicker draw.

Who are Bandolier Holsters Designed For?

Many hunters prefer to go handgun hunting; .44, .454 or .500 Magnum long barreled revolvers with scopes are largely gaining in popularity as hunting weapons, but just as you would sling a hunting rifle or shotgun over your shoulder, you will also want a place to store your revolvers.

A major plus to bandolier holsters in regards to hunting is that there are many on the market that are specifically designed to hold scoped revolvers.  These holsters also have special padding to ensure that the scope is kept in good condition even as the hunter traverses over rough terrain.  One of the problems that hunters can face is slipping or letting their scoped weapon fall. But when they pick it back up to take a shot at their prey, they can have the animal in their sights and miss completely, because the scope was knocked off topic.

As a result, keeping your scoped revolver holstered in your bandolier is a far better option in comparison to simply holding it in your hand or keeping it jammed in your belt as you walk.  Plus, a bandolier holster is a better fit for a long barreled revolver to begin with, as it will allow you for a faster draw in comparison if you were to draw it from either a quick draw or cross draw holster on your hip.

Drawing a long barreled scoped revolver from a bandolier is also a better choice than if you were to draw from a shoulder holster, for a number of reasons.  This also leads us into the next topic of discussion: what is a better option between shoulder holsters and bandolier holsters?

Deciding Between a Shoulder Holster and Bandolier Holster

Generally speaking, a shoulder holster is a better choice for any gun if your goal is concealment, but a bandolier holster is a better option if you want a faster draw.  Why?  Because bandolier holsters wrap around your torso, so they are hardly concealable.  But because they wrap around your torso, they will provide better support for your handgun, especially if it’s heavy.  For a clean draw from a shoulder holster, one hand should be placed on the holster to secure it, while the other draws the gun. You can then assume a two handed grip to begin firing.

But with a bandolier holster that’s tied on tightly, the holster should already be properly secured.  This will allow for a faster draw and also allow you to assume a two handed firing position faster as well.

Another bonus with a bandolier holster versus a shoulder holster is its ability to let you hold more weight on yourself without as much exertion.  Packing a large frame revolver in a shoulder holster puts much weight on your shoulders that can be tiring after traversing the countryside for extended periods.  But with a bandolier holster, your entire torso largely holds the weight of the gun, taking much of the weight off from your shoulders.

A bandolier holster can be one of the most efficient and comfortable ways to pack a large frame hunting revolver when you trek out into the wilderness.  Beyond that, it’s also the holster of choice for those who choose to pack a smaller revolver or semi-automatic pistol while hiking, as it takes the weight off their hips and shoulders that their backpack would already be putting more than enough weight on.

Material and Ease of Use 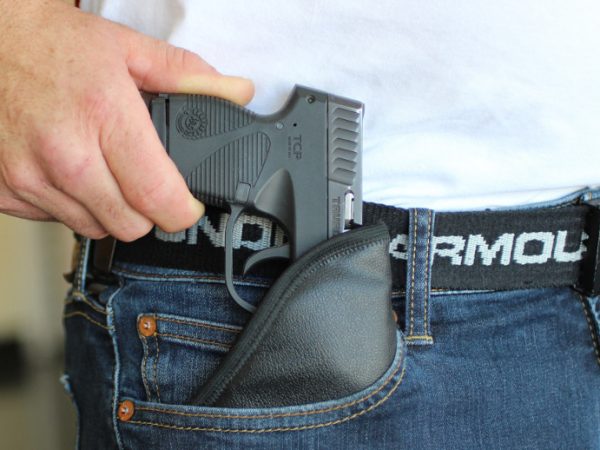 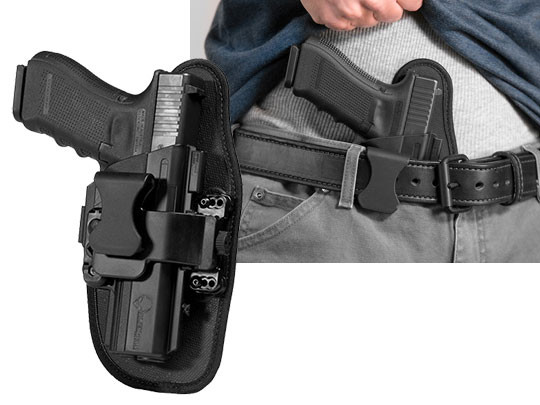