No matter what weather season we’re in, it’s always a good time for people who carry concealed to re-evaluate their wardrobe. During the colder months (when everyone’s wearing a thick jacket), you can get away with larger holsters, more exotic carry styles, and not having to alter your clothes to hide your concealed handgun. No matter where you live, though, as the seasons change, you’re going to find that your big, heavy concealed-carry winter jacket is going to do you more harm than good.

For those of us that just want to eliminate the hassle of hiding holsters altogether, we can always go with jackets designed with concealed carry in mind.

These specially designed jackets have holsters and magazine pouches sewn inside the lining to keep your handgun securely in place. Naturally, this eliminates the need for a belt or shoulder holster that you would need to conceal and allows you to dress for your occasion rather than your handgun.

But by far, the best part about these concealed carry jackets is the fact that they look like, well, normal jackets. To conceal larger holsters, you would normally need larger clothes, and if your clothes are always oversized and out-of-place, hiding your concealed firearm is a moot point; people will look at you and already know you’re armed. With a good concealed carry jacket, not only will nobody see your handgun, but people won’t even think you’re carrying one. If you’re into less restrictive wear, there’s also CCW vests to consider.

Whether you’re a plain-clothes police officer, a private security contractor, a world traveler who wants to keep themselves safe, or just an average citizen looking to carry concealed and comfortable, each of these four jackets below can help you carry your personal handgun comfortably, securely, and without drawing attention to yourself.

In addition, the Velcro cuffs and vented underarms mean that this jacket is going to not only fit exactly how it’s supposed to, but it will also work for you during stretches of physical activity as well.

To top it all off, you’re getting a huge amount of pockets to store everything from wallets and personal electronics to more specialized survival gear. It’s thin enough to layer under for colder days, light enough for warm days, and unassuming enough to be worn pretty much anywhere.

And you’re getting just as many options with the holster as well. The Rothco Soft Shell Jacket gives you ambidextrous carry with two pockets for concealed carry handguns, one on each side, each one deep enough to hold a full-size handgun like the Glock 19 or M1911, as well as four magazine pouches.

Even if you aren’t using every single pouch, the sheer number of them gives you plenty of options to balance out your weapon and ammunition; simply store your weapon in a cross-draw setup on your weak side and your magazines on your strong side, and you can help balance out the weight. However you choose to balance your gear, you’ll find that this Rothco jacket can be one the best concealed carry jacket you have ever owned. It gives you a place for everything and keeps everything in its proper place. 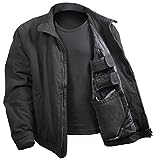 If you live in a cooler climate, however, you may want to consider the thicker Three Season Concealed Carry Jacket from Rothco instead for your CCW clothing. With this CCW jacket, you’re still getting all the best features of the Soft Shell jacket like a water-resistant outer layer, and plenty of outside pockets to hold everything you can think of. The same thing goes for the holster; it’s still ambidextrous and still carries four magazine pouches, yet from the outside is completely unassuming.

In some regards, this coat is actually better than its lighter weight cousin, because while both jackets can carry larger full-size handguns, the extra padding on the Three Season Jacket gives you even less printing. Other than that, both jackets are functionally pretty identical.

Choosing which Rothco jacket to buy really depends on where you live and the kind of weather you expect. While the Soft Shell Jacket would function better as a rain jacket or windbreaker, the Three Season Jacket is all about warmth.

This isn’t to say that you can’t layer up the Soft Shell to be warm, or that the Three Season won’t keep water out, far from it; both jackets are well-made and do their jobs admirably. However, the Three Season Jacket, with its quilted interior and lack of wicking material, is definitely more suited to the northern US than its lighter Rothco concealed carry jacket counterpart.

Unavailable at Amazon, here’s an alternative: 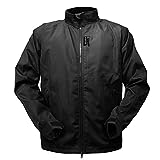 This Limited Edition Tactical Concealment Jacket from Rivers West is a particularly great seasonal piece for concealed carry. A simple fleece jacket with a button-up design on the outside means that you’ll be able to keep warm and not attract any attention at all; literally nothing on the outside of this holster jacket looks “tactical” or  out of the ordinary. On the inside, however,

The simple Velcro cross-draw jacket holster secures most handguns from revolvers to full-size, and can be quickly and easily disengaged. In addition, the jacket comes with an integrated shoulder harness to balance out the weight of your handgun and prevent noticeable sagging, while the conceal plate on the opposite side of your holster prevents printing. With little details like these, you can be sure that this Rivers West jacket will not only keep you warm; it’ll keep you safe.

As seasonal wear or a first-time concealed carry jacket, this Rivers West model hits all the high notes. First off, the price is noticeably lower on this jacket than other models at around fifty dollars, so you don’t feel obligated to wear it year-round to justify the cost; even if you just want to wear it as a regular coat, it’s a bargain at that price.

Also, there’s nothing terribly fancy on this model, which is great for new concealed carriers, but a special benefit for concealed revolvers; this way, you’re not paying for magazine pouches you know you’re not going to use. Even if you prefer a standalone cross-draw harness for eleven months out of the year, this jacket can really help you out on the few days when you need a carry option, but don’t want to have to fight your clothes to retrieve your handgun. 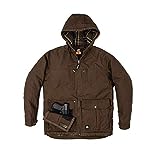 One of the complaints you’ll hear about a concealed carry jacket is the fact that you still need to move it out of the way to draw, slowing your reaction time a bit. This is not the case with the Berne Men’s Concealed Carry Echo One One, a concealment jacket whose unique setup can give you a concealed jacket carry with an incredibly fast draw time. Rather than storing your handgun inside the jacket, the Echo One One’s Adder System works by storing your handgun on a MOLLE rig on the front of your jacket, then covering that rig with a fully-functional front pocket.

When you need to draw your handgun, simply pull down on the front pocket, retrieve your handgun from your MOLLE rig, and you’re ready to go. With the Berne Echo One One, you’ve got one of these Adder Systems on each side of your body, making it ambidextrous and allowing you to store spare magazines or tools on your weak-side MOLLE rig.

Again, like all good concealed carry jackets, you’re entirely inconspicuous; the cargo-style pockets don’t look out of place, and their design also reduces printing. Combining the ease of a belt holster with the concealment of a jacket, the Berne Echo One One is definitely a one of a kind setup that’s sure to get the attention of any concealed-carry enthusiast.

Not only does this jacket work well as a concealed-carry option, but it’s also functional workwear. With a style that’s not out of place with Carhartt or Dickies work jackets, the Berne Echo One One is made with a heavy-duty cotton canvas, a flannel lining, and heavy-duty pockets and zippers, so this jacket doesn’t just look the part, but actually works just as hard as you do.

Functionally impressive as both a built-to-last work jacket and an innovative carry system that’s incredibly hard to detect, the Berne Echo One One would be worth the price if it just did one of those two things.

Whichever of these concealed carry jackets you prefer, you’ll find that they all give you a great way to keep yourself comfortable and safe.

1 thought on “Choosing a Concealed Carry Jacket or Tactical Jacket”

Scroll back to top