So, you want to keep a handgun in your house. Good! You’re joining an ever-growing majority of Americans who chose to be defenders of their families and personal assets, instead of victims of tragedy. The #1 leading cause of pain and suffering are other humans – sounds macabre, we know, but it’s a simple fact. With that in mind, there are plenty of important considerations that you should think about before you go out and buy a gun and keep it in your home. 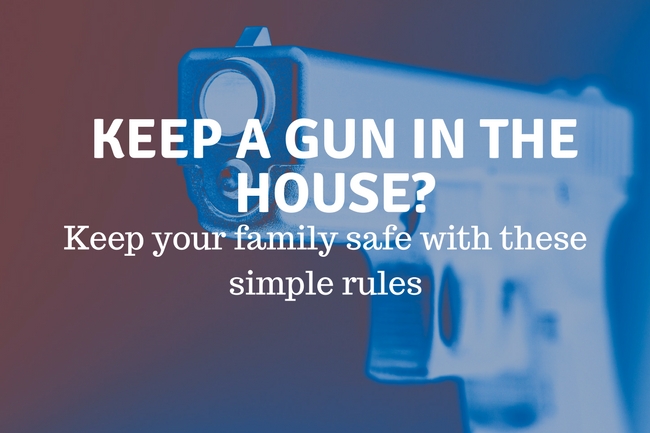 It’s a cliché, but with that great power comes great responsibility. You are investing in a tool designed to take a life. If you ever have to use that tool for its intended purpose, it will absolutely be the most critical moment you’ll ever experience in your own life.

The burden of that act is something most will never have to bear, but if you’re making this investment you must accept that responsibility. You must be willing to carry out that act to protect yourself and others – fail to do so, and it will probably be the last thing you ever do.

Those are heavy words of truth. If you’re still reading, then we assume you’ve accepted these truths and you wish to continue. Let’s dive into those careful considerations you should make before keeping a handgun in your house:

Know How to Use Your Handgun!

That’s such a blatantly obvious requirement, but you’d be surprised at how irresponsible some new gun owners are. Do not buy a handgun, load it, and shove it in a drawer or safe without ever using it. If or when the time comes to use it in that critical moment, you will fail. It will end poorly for you and your loved ones. Again, heavy words, we know. But we can’t underscore this importance enough.

Get training. Talk to the gun shop you’re purchasing from and ask for references on firearm classes if they don’t offer them on-site. Take your gun to the range and learn how it works. Learn how the safety does its job, learn how to load it, learn whether it has any features that could trip you up.

Go to the range. Those features could include a dry-fire prevention that stops you from pulling the trigger without the weapon being loaded. Your new gun might have a chamber indicator that tells you whether your gun is loaded or not. You need to know these things and practice how to use them at the range, in real-world conditions. “Testing” them out at home won’t do.

Practice shooting (A lot). This is obvious, too: Practice how to shoot your handgun! No handgun is accurate from the factory. Your new weapon will shoot high, low, left or right. Even in close quarters, knowing your handgun is on-target will may a difference. It could mean the difference between stopping a threat and being attacked.

They say it takes 10,000 hours to get good at anything. When it comes to shooting, it’ll take thousands of rounds before you’re truly confident and prepared to protect yourself. That’s a fact. Remember, you won’t be shooting at a paper target in your kitchen or hallway.

Know the Four Fundamentals of Marksmanship

There are four critical fundamentals of marksmanship that’ll help ensure you’re shooting confidently and accurately. In a panic, you’ll be nervous, fidgety, and clumsy. You must practice these four fundamentals so they help you when it matters most:

1. Steady position. That means assuming a comfortable, planted stance with your body squared up and ready to accept firing and recoil. In a home-defense situation, you’ll be moving quickly and with uncertainty. With training, you’ll be able to hastily assume at least a partially steady stance so you can confidently engage your attacker.

2. Aiming. This is self-explanatory. You’ll need to know how to aim properly to ensure you’re on-target (and not slinging bullets through your drywall). This is especially critical in a home-defense situation. We won’t illustrate the possibility for you, but we imagine you can figure out what might happen if a stray bullet goes the wrong way.

Proper aiming of your handgun means drawing both the front and rear sights on the target, so they light up with each other vertically and horizontally. Your focus should be on the front sight, with the target ahead and the rear sight slightly blurred. Your point of aim should be on the center mass of the target. For engaging an attacker, that means hitting the center of the chest, directly on the sternum.

Proper breath control means shooting consistently at the apex of your breath – pulling the trigger as you finish exhaling. There is a natural, momentary pause between exhaling and inhaling, and it is during this fleeting moment that the movement of your chest and arms ceases, preventing any negative impact on your point of aim. To train proper breath control, exaggerate your breathing and take your shots consistently at this moment of exhale. Train this bodily function enough, and you’ll begin to do it naturally whenever you shoot.

It’s common knowledge that humans naturally want to investigate things they’re not supposed to. “No Trespassing” signs are welcome mats for teenagers. Cookie jars hidden atop fridges are late-night snacks for kids, and weapons meant for adults are begging for disaster in the hands of an uninformed spouse or child.

Lock your handgun up. That means securing it in a lockbox or safe. Only you should have the key or combination, biometric safes add another level of security. If you’re married or living with a partner, they must be trained to use the weapon and they must know all its functions before being given access. Failure to do so may result in injury or death.

Combination lockboxes are great and they’re what we recommend for safe storage. They’re easily movable and they can be stowed in a nightstand, vanity, or under a couch. Their locking mechanism is permanently attached. Combination safes are great if you plan on investing in rifles, shotguns, or other weapons, too, but they’ll be static and therefore not always easily accessible.

That sounds oxymoronic to our instructions above, locking up your handgun. To be sure, your handgun should be safe from prying eyes and hands that are not trained, adult or child notwithstanding. But your handgun will do you no good if an intruder is skulking down your hallway while you’re left without access to your handgun.

That’s why we recommend biometric or combination-locked gun storage. A key could always be found by someone who shouldn’t have it. Keeping a key hidden yet easily accessible is difficult, too, and fumbling for that key in the middle of the night will do you no good.

Ensure Your Family Knows What to Do

Collateral damage is the unintended injury or death of a loved one. We alluded to this earlier when describing the responsibility you must accept while keeping a handgun in your home. You must able to reduce the chance of collateral damage in a home-defense situation as much as possible. There will always be a great risk when firing a handgun in your home, but you can reduce those risks. Your family can take steps to avoid injury or death in this situation.

You should first have a very candid and open discussion with your family and house members about your intentions to keep a handgun. Do not avoid describing to them what exactly that means, in the simplest terms: If a threat is posed to your lives, you intend to eliminate that threat with lethal force.

That lethal force can be misplaced accidentally, and so you should instruct your family members what to do if this situation ever happens. Instruct them to seek shelter and get low to the ground. They should be instructed to barricade themselves if possible and they should attempt to take shelter behind physical cover – that could mean a bed, bookshelf, a series of doors, or even a toilet (porcelain and ceramic are great at stopping bullets).

They should be instructed to reduce their physical silhouette as much as possible. That means crouching or laying down behind the cover they find. They should not attempt to exit the house. Home invasions are statistically likely to be carried out by multiple individuals – one of whom will likely be waiting outside. Exiting the property will also cause them to present themselves as a target.

Invite Everyone to Shoot with You

Keeping a handgun in the house does not mean bearing that responsibility alone. Your family should be aware of the dangers and safety requirements of owning a handgun, and they should be familiarized with the basic functions of the weapon.

We’re not advocating sticking that shiny new S&W .40 in a 5-year-old’s hands. Older children who can understand the inherent risks of firearms should be made aware of their functions and capabilities. More importantly, they should also be trained to use the weapon if the situation calls for it. Knowledge and responsible training is the greatest method of preventing a child from unsafely handling a handgun and causing an unintended tragedy. Do not be afraid to include them in training, responsibly.

This is our last topic because it is absolutely the most important. These are the four critical rules that’ll help to prevent a tragedy. You and every family member (even if you or they never plan to shoot your handgun) should know these four rules of gun safety, just in case:

1. Your gun is always loaded. We state this as a fact because it should treated as such. That means handling your handgun as if it is always loaded. Checked it three times? Empty chamber? Doesn’t matter – treat it as if it’s loaded. You have every reason to, and you have no reason not to.

2. Never point at something you don’t wish to kill. Pretty self-explanatory, but it has to be mentioned. Never, ever point your handgun at anything you don’t intend to kill. People die every year because this rule of gun safety is not followed. Don’t do it. Ever.

4. Keep your finger off the trigger until you’re ready to shoot. Another self-explanatory and easy-to-understand rule, but it must be stated. Never place your finger on the trigger until you’re ready to shoot. Accidental discharges are a leading cause of injury and death in firearms-related incidences. They’re common enough that they have their own buzz phrase: “Negligent discharges”. Don’t be one of those news headlines.

There’s a lot of information we just covered, so for the sake keeping a simple theme, let’s recap:
• Take a training class with your handgun if possible
• Learn your handguns functions at the range, and test them
• Learn to shoot, and shoot a lot, then shoot some more
• Take the four fundamentals of marksmanship to heart
• Lock up your handgun but keep it easily accessible
• Inform your family and train them how to react to a threat
• Invite family to train with you, even children who can understand
• Know the four rules of gun safety, teach them to your entire family

Satisfy these requirements and train consistently, and you’ll be a safe, responsible gun owner who can protect his or her family and house with confident. Good luck.